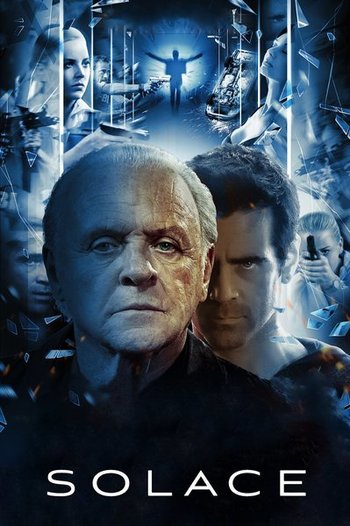 Solace is a 2015 Thriller film featuring Sir Anthony Hopkins, Colin Farrell, Jeffrey Dean Morgan, and Abbie Cornish in a tale about a serial killer, a psychic, and a pair of FBI agents looking to solve the killings. Agent Joe Merriweather (Morgan) and his partner Agent Katherine Cowles (Cornish), contact John Clancy (Hopkins), a psychic who has helped the FBI (and Joe specifically) on cases before. Katherine is skeptical of John's abilities, but quickly grows to appreciate his insights as well as his companionship. Meanwhile, John begins to realize, over the course of their case, that he's up against someone very familiar, and someone who may very well be better than him.

The film is perhaps better known for having originally been written as a sequel to Se7en, with Morgan Freeman as the psychic, before it was scrapped and later rewritten with Hopkins in the role as Solace.