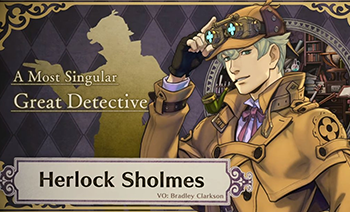 Pictured here without his sidekick, Dr. John Wilson.
Princess Clara: Oh my god! It's *Beep* Mouse!
Captain Hero: I should have known you were behind this, Mickey *Beep*.
— Drawn Together
Advertisement:

You have a great idea for a character name. But there's a problem — someone else had the idea first. And they used it... a long, long time ago. Like, before you were born. The character may not even be that well-known (or known at all) today. Too bad — you missed your chance. Better change the name before airtime, or you'll find yourself knee deep in the paperwork of a trademark infringement lawsuit.

If word gets out online, the original name may still be used by the fans. Efforts to have this listed as a violation of intellectual property are no doubt pending. However, certain uses are (at least in the United States) covered under what are known as Fair Use Laws

We have a page about Trademarks if you're really interested in how they work and are used.

The same reasoning behind many a Stealth Pun.

This is one reason why a character might be Renamed to Avoid Association. Contrast Captain Ersatz, where the writers are trying to use an already existing character but can't. See also Brand X, Bland-Name Product, Disney Owns This Trope, You Wanna Get Sued?, Lawyer-Friendly Cameo, A.K.A.-47, Product Displacement, and Clumsy Copyright Censorship.

Beholders are copyrighted by Wizards of the Coast so clearly, this must be something else.

Beholders are copyrighted by Wizards of the Coast so clearly, this must be something else.