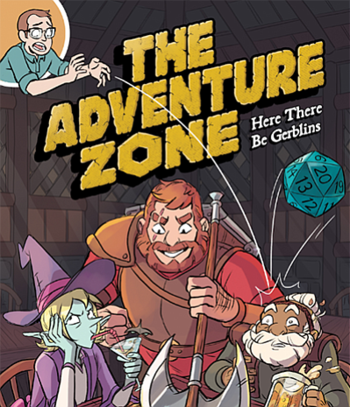 It's the Adventure Zone!
Advertisement:

The Adventure Zone is the graphic novel adaptation of the fantasy-RPG podcast of the same name, written by the McElroy Brothers (Justin, Travis, and Griffin) and their father Clint, and illustrated by Carey Pietsch. The novel roughly follows the podcast's first campaign, The Adventure Zone: Balance, with minor changes and legally necessary name alterations. The story follows human fighter Magnus Burnsides, Elven wizard Taako, and Dwarven cleric Merle Highchurch as they take a job from Merle's cousin, Bogard Stoneseeker, to deliver supplies to the nearby town of Haverdale. When the delivery goes south, the three adventurers track down Bogard and find themselves embroiled in a conflict larger than they expected.