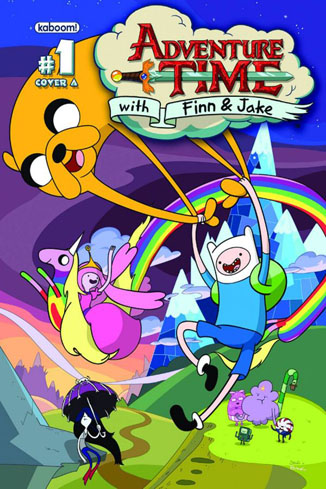 Adventure Time is a comic book series by KaBOOM! Comics. The first 35 issues were written by Ryan North, after which Christopher Hastings took over. It is based on the animated series. The individual issues have shorter back-up stories by various creators, which are collected in the Sugary Shorts series of TPBs. In 2016 a separate series, Adventure Time Comics, was begun with similar shorts.

The comic ended after 75 issues in 2018, followed by a three part finale miniseries called Beginning of the End.

In July 2018, Cartoon Network and BOOM! Studios announced a 12-issue miniseries called Adventure Time: Season 11, taking place after the events of the show's Grand Finale "Come Along with Me". It released October 2018, but was Cut Short after only six issues.