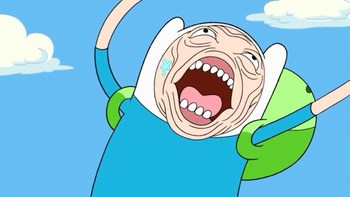 What time is it? Apparently, time to make ridiculous faces as you try to conquer your fears.
Advertisement:

Through a combination of eyebrow-raising jokes younger kids might not get, a wide cast of unusual characters, and sheer absurdity, Adventure Time has many moments that will leave the audience giggling.

Advertisement:
Season 2
"It Came from the Nightosphere"

"Loyalty to the King"

"Blood Under the Skin"

"The Chamber of Frozen Blades"

"Belly of the Beast"

"Memory of a Memory"

"From Bad to Worse"

Season 4
"Hot to the Touch"

"Return to the Nightosphere"

"Beyond This Earthly Realm"

All The Little People

"A Glitch Is a Glitch"

The Party's Over, Isle de Senorita

We Fixed a Truck

Escape from the Citadel

The Prince Who Wanted Everything

Thanks for the Crabapples, Giuseppe

"You Forgot Your Floaties"

"Stakes: Take Her Back"

The More You Moe, the Moe You Know

The Hall of Egress

Lady Rainicorn of the Crystal Dimension

I Am A Sword

"Fionna and Cake and Fionna"

Come Along With Me

Have You Seen The Muffin Mess?