WARNING: Spoilers for the final episode are unmarked. 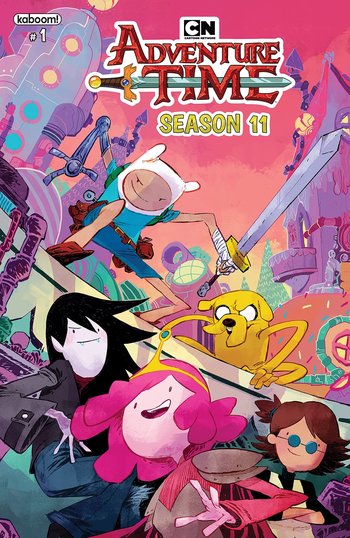 The theme song wasn't lying when it said "the fun will never end."
Advertisement:

In a surprising twist, Cartoon Network announced in July 2018 that Adventure Time will continue after the final season, but not in a way that everyone imagined it.

Produced by Cartoon Network and BOOM! Studios and written by Sonny Liew (The Shadow Hero and The Art of Charlie Chan Hock Chye) and Ted Anderson (Adventure Time: Beginning of the End and My Little Pony: Friendship Is Magic (IDW)), with art by Marina Julia, Adventure Time: Season 11 takes place after the Grand Finale of the animated series. As the Great Gum War comes to a close, Finn, Jake and the entire Land of Ooo begin to pick up the pieces with new and unexpected friends.

The comic was released on October 2018 and it was originally going to consist of 12 issues. It was also accompanied by a six-part miniseries titled Adventure Time: Marcy and Simon, with Marceline and Simon as the main protagonists.

Unfortunately, while the Marcy and Simon miniseries did well-enough to complete its run, this comic ended up being cancelled due to sales not meeting Cartoon Network's expectations, ending the story with only six issues.