What time is it? It's homosexuality time! 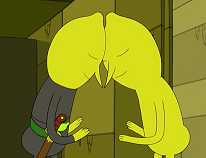 This is an ACCEPTABLE COMPANION!!
Others