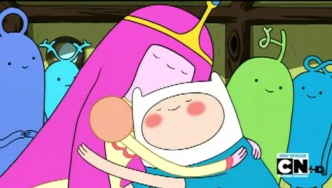 "Give me a hug, hero!"
Advertisement:

Although there is plenty of creepy stuff and tragedy on Adventure Time, there is still room for some Sweet Dreams Fuel.

Jake: Finn, if I came across your lifeless body, I'd clasp you dramatically for a kajillion years.

"It Came From The Nightosphere"

"Loyalty To The King"

"Blood Under The Skin"

"The Chamber Of Frozen Blades"

"Belly Of The Beast"

"Memory Of A Memory"

"From Bad To Worse"

"Hot To The Touch"

"Return To The Nightosphere"

"Beyond This Earthly Realm"

"All The Little People"

"The Party's Over, Isla de Senorita"

We Fixed A Truck

Season 6
Wake Up/Escape from the Citadel

Thanks for the Crabapples, Guiseppe

The More You Moe, The Moe You Know

Come Along With Me