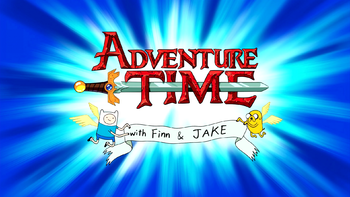 You and I will always be back then...
Advertisement:

Adventure Time (full title: Adventure Time with Finn and Jake) is a multimedia franchise centered on the Cartoon Network animated series of the same name, created by Pendleton Ward.

The series originated as an animated short produced for Nickelodeon's Random! Cartoons variety show. Following its December 2008 airing, the short was uploaded to YouTube, where it quickly went viral. Nickelodeon passed on greenlighting a full-length series twice due to creative differences, with the rights subsequently reverting to Pen Ward and Frederator Studios. The series was then re-presented it to Cartoon Network, with the channel going on to greenlight two seasons after the creation of a second pilot

. The series received a large marketing push leading up to its April 5, 2010 premiere.

The show followed the adventures of boy hero Finnnote (named Pen in the Nicklodeon pilot) and talking shape-shifting dog named Jake in the strange, bizarre, very dangerous world of Ooo. The setting is gradually revealed to be Earth after an apocalyptic event known as the "Mushroom War", an event which radically transformed the landscape and brought back magic to the world, leading to the creation and reemergence of all kinds of bizarre creatures and entities. Finn is supposedly the only living pure human left in this world, having been adopted by Jake's family after they found him as a baby. Over the course of the series, the show's growing and colorful cast of characters would come to include the boys' feudal patron Princess Bubblegum, ruler of the nearby Candy Kingdom; Ice King, a deranged elemental wizard (and increasingly Friendly Enemy) with a penchant for princess-snatching; and Marceline, the rebellious, self-proclaimed Vampire Queen.

As one of the most unique and interesting pieces of fantasy to ever grace the genre, to say the show is weird is an understatement. As the series continued, the show maintained a playful air while still dabbling heavily in Mood Whiplash and Cerebus Rollercoaster, as Finn matured into a young adult and the narrative delved more into the backstory of its setting and the complex relationships between its expansive cast of characters. Because of its eclectic mix of comedy and drama, Adventure Time grew a large fanbase to become one of Cartoon Network's biggest Cash Cow Franchises. The original series concluded production in 2017, with the final episode airing the following year on September 7th, 2018, rounding out at 10 seasons and 283 episodes.

Adventure Time would see continuations in other animated projects, the first of these being Distant Lands, a four-episode sequel miniseries that tied up some remaining loose ends and explored the characters' lives in the years after the original show's Grand Finale, "Come Along With Me". Distant Lands would then be followed by another miniseries, Fionna and Cake; another miniseries (now targeted at young adults) that follows Finn and Jake's alternate universe counterparts on their own adventure to maintain the fabric of reality.

The serial comic spin-offs are published by KaBOOM! Comics. They are notable for their recruitment of writers and artists from the world of Webcomics and indie comics, in preference to established genre comics creators.

Non-serialised graphic novels done in a manga-like format, and also published by Kaboom.

Games the series appears in: