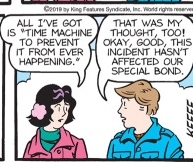 Bob makes a totally random, out-of-the-blue statement. Later on, Alice, who never heard him make the original statement, repeats it or makes reference to it. How did she know it? Apparently, they somehow managed to follow the same, bizarre line of "logic".

Compare Ironic Echo, Ironic Echo Cut, Brick Joke, Phrase Catcher, Gag Echo. When the reality itself agrees with the dumbass, it's Achievements in Ignorance or The Cuckoolander Was Right.

Not quite related to Are You Pondering What I'm Pondering? and Improbably Predictable.

Looks like Weiss and Ruby agree on one thing apparently.

Looks like Weiss and Ruby agree on one thing apparently.