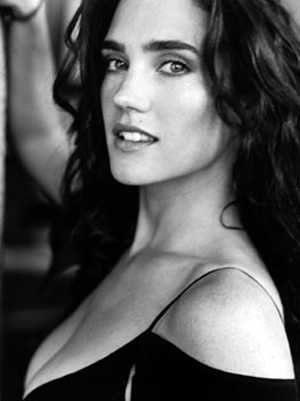 "I didn't expect to win the Oscar. You grow up watching the Oscars on TV and you think it happens to fancy people. It was really surreal."
Advertisement:

After beginning her career as a child model, Connelly made her film debut at the age of 13 in Once Upon a Time in America, in which she played the younger version of Elizabeth McGovern's character. But she soon transitioned to leading roles, including in the horror film Phenomena and alongside David Bowie in the cult hit Labyrinth. Despite critics being lukewarm to her early performances, more leading roles followed. And she started to win critics over with roles like The Hot Spot. Success didn't come that quickly, however; she found herself typecast in Fanservice roles. For most of the '90s and early 2000s, Connelly was heavily associated with nudity or titillation in her films, regardless of the quality of her performances. The latter were usually acclaimed, leading critics to sigh about wasted potential.

Things started to turn in her favor with a turn in the well-acclaimed Cyberpunk film Dark City. But it was with Requiem for a Dream that she started to make the switch from Ms. Fanservice to serious actress. More roles like Waking The Dead kept earning her critical acclaim, and she managed to win an Oscar for A Beautiful Mind. Nowadays she's a very respected actress with lots of accolades to her name. She's also got Marvel Comics cred due to her role in Ang Lee's Hulk where she played Betty Ross as well as voicing the AI "Karen" in Spider-Man: Homecoming.

As a fun fact, she's done three films that all feature the same exact shot: Jennifer's character stands at the end of a pier looking out to the sea. Dark City, Requiem for a Dream, and House of Sand and Fog all feature this shot.

She is married to Paul Bettany, and they have two children. Connelly also has another son due to a previous relationship with photographer David Dugan.

Kathy learns the hard way that walking around barefoot in a construction site is not exactly a good idea.

Kathy learns the hard way that walking around barefoot in a construction site is not exactly a good idea.