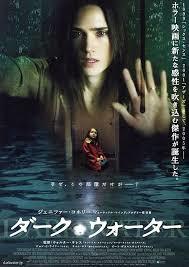 Dark Water (aka Honogurai Mizu no Soko kara, translating to "From Under the Murky Water") is a 2002 Japanese horror film directed by Hideo Nakata, best known for being the director of Ring and Ring 2. The film is based on Floating Water, a short story by Koji Suzuki (who also wrote the Ring series of novels), from his horror anthology also titled Dark Water. There is also a manga adaptation that holds little similarity to the film, although the apartment building is similar.

The film was remade in the United States in 2005, under the same title.

The film follows Yoshimi Matsubara, who is in the midst of a messy custody battle with her estranged husband over their young daughter, Ikuko. Desperate to prove herself a fit parent, she gets a job as a proofreader for a small publishing house, and moves herself and Ikuko into an an eerie, rundown apartment block. Shortly after moving in, she notices that there's a leaky water stain on her bedroom ceiling, and it's growing by the day. Strange things start happening to the Matsubaras, several of which involve the mysterious appearance (and subsequent re-appearances) of a child's red bag. Yoshimi gradually discovers the horrifying truth behind these events, and realizes that the force haunting the building means to harm her and her daughter.

Not to be confused with the animated TV series The Pirates of Dark Water, or the 2019 Based on a True Story legal thriller Dark Waters.

This film and its remake contain examples of: