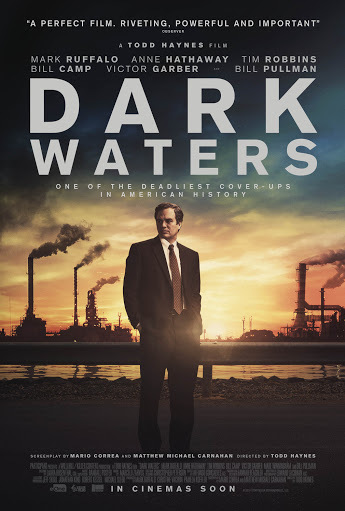 "Better living through chemistry."
"The system is rigged! They want us to think it’ll protect us, but that’s a lie. We protect us. We do. Nobody else. Not the companies, not the scientists, not the government. Us. A farmer with a twelfth grade education told me that. On day one, he knew, and I thought he was crazy. Isn’t that crazy?"
— Robert Biloit
Advertisement:

Dark Waters is an American biopic / legal thriller released in 2019. Based on the 2014 New York Times article The Lawyer Who Became DuPont's Worst Nightmare, it dramatizes the true story of the DuPont Teflon scandal and its related legal battles.

The film follows Robert Biloit (Mark Ruffalo), a lawyer at a Cincinnati firm that primarily serves corporate clients. Following a big promotion, he gets a visit from Wilbur Tennant (Bill Camp), a friend of his grandmother in West Virginia. A humble if irritable rancher, Tennant's cattle and other animals have been dying of strange diseases and birth defects ever since the DuPont Chemical corporation bought some nearby land, leading him to believe the company has been illegally dumping toxic waste in the local groundwater.

While Robert is initially reluctant to take the case, as his firm specializes in defending chemical corporations, a talk with his grandmother and a visit to Tennant's ranch changes his mind, and he begins digging into DuPont's dealings in the area. But as the company does its best to dissuade him and hinder his efforts, Robert soon realizes that this illegal dumping issue is just the tip of the iceberg in a decades-long conspiracy to hide the harmful effects of DuPont's chemicals...