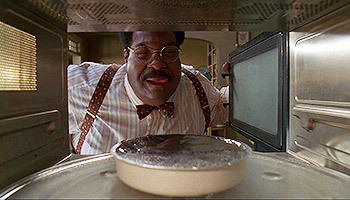 This is a shot where the container is shown being opened from the inside. This camera angle provides an unobstructed view of both the character's face and the box's contents, allowing the audience to see the contents (or lack thereof) and the character's reaction to them simultaneously.

A Compartment Shot may be used to show a character Post-Stress Overeating, checking on an important object, going for a Midnight Snack, or making a significant discovery. It may also be used to emphasize the character's Empty Fridge, Empty Life or showing the reaction to seeing a MacGuffin while showing the object itself.

See also Trunk Shot, a specific version of this shot from inside the trunk of a car.