Film / Dark Night of the Scarecrow 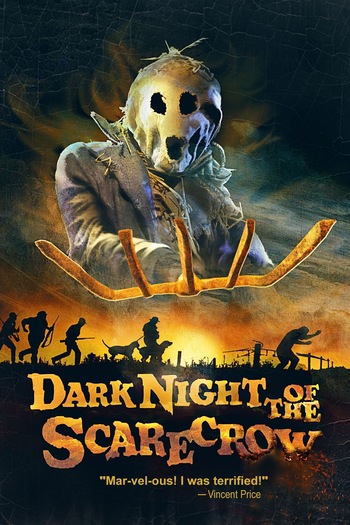 Directed by veteran novelist Frank De Felitta from a script by J. D. Feigelson, Dark Night of the Scarecrow is a suspense/horror Made-for-TV Movie that first aired on CBS in 1981. According to Aaron Crowell, managing editor of HorrorHound Magazine, this was the first feature-length horror movie with a scarecrow as its centerpiece, with many having copied this image in subsequent years, giving Feigelson credit as progenitor of the entire “killer scarecrow” genre.

The plot concerns Bubba (Larry Drake), a mentally handicapped man being unjustly accused of attacking a young girl. Disguised as a scarecrow, he hides in a cornfield only to be hunted down and shot by a posse led by the cruel Otis Hazelrigg (Charles Durning). Immediately afterward, it's revealed that he saved the girl from a vicious dog attack, so the members of the search posse cover up their crime and successfully beat the rap for murdering poor Bubba. Unfortunately for them, someone's not too happy about their Karma Houdini status, and one by one the men are killed off in grisly accidents, the only common element being a mysterious scarecrow that suddenly appears in each man's field...

The film was finally given a DVD release in 2010. Not to be confused with Night of the Scarecrow.