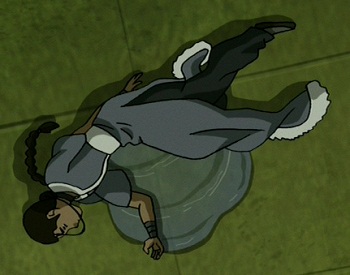 That's gotta hurt.note Nah, it's just spilled water.
"And then our flag will fly, against a blood-red sky!"
— Zira singing "My Lullaby", The Lion King II: Simba's Pride
Advertisement:

When a fluid (or highly flexible solid) falls and/or spreads in a way that it is made to look like blood. This is either to show a symbolic loss or to perform a standard parody.

Often the fluid will be red, and sometimes this is a trick shot to make it appear like someone has been injured, only to later reveal otherwise. It's sometimes used in kid- friendly shows to imply violence that would never pass the censors.

See also Alien Blood for strangely colored fluids pouring out of alien beings and Machine Blood, for "bleeding" machines or robots. See A Bloody Mess for red liquids being mistaken for blood. See Blue Liquid Absorbent for blue liquid used in place of blood (or other bodily fluids) to avert distasteful imagery.