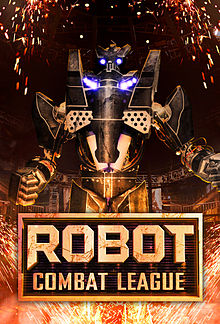 Chris: Are you ready for some robot carnage? Get ready for battle!
Advertisement:

A series on Syfy hosted by Chris Jericho where twelve 8-foot tall robots duke it out in one-on-one slugfests (basically as close to a Real Life Real Steel as possible at the moment). Each robot is assigned to a two-man team: the Robo-Jockey controls the arms, while the Robo-Tech controls the legs. These people include IT guys, robotic engineers, athletes, MMA fighters, military men, and others. The robots are created by Mark Setrakian, an alumna contestant of BattleBots and the man behind the animatronics of films such as Hellboy (2004) and Men in Black.

The twelve robot pugilists of Season 1 are as follows:

Match-up results are untagged, so expect spoilers ahead.