Film / Dave Made a Maze 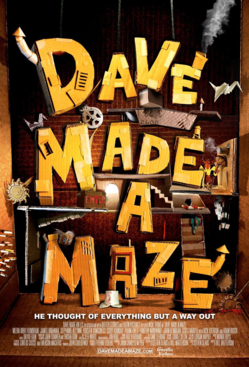 I built something because I wanted to build something. And if I could just finish it, I just know that it would... it would be great! Or true! Or real!
— Dave
Advertisement:

Dave Made a Maze is a 2017 Comedy Horror Fantasy Adventure film directed by Bill Watterson (not that one), and starring Nick Thune, Meera Rohit Kumbhani, Adam Busch, and James Urbaniak.

After coming home from a trip, Annie (Kumbhani) discovers that her boyfriend Dave (Thune) has built a cardboard fort in the middle of their apartment that he apparently refuses to exit, claiming that he is "lost".

After calling their friend Gordon (Busch) (who then calls their other friend Harry (Urbaniak), as well as several other people), Annie decides to enter the maze despite Dave's repeated warnings that it's too dangerous. Immediately upon entering, the group realizes that Dave's maze is, in fact, a colossal labyrinth, and Dave really is lost.

Dave Made a Maze provides examples of:

Hey, you made it to the end! Come over here and give me a high-five!