Film / The Dead One 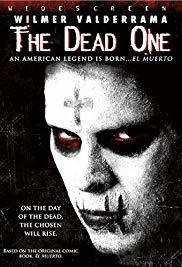 The Dead One is a 2007 American Superhero horror film.

Diego de la Muerte was a young man killed in a car crash. However, he came Back from the Dead with the help of the Aztec gods. Unfortunately for him, this resurrection doesn't come without a price. Diego has become El Puerto, a tormented soul who walks the Earth in search of sacrifices for his masters. However, when they demand his former girlfriend as a sacrifice, El Puerto finds the courage to rebel.