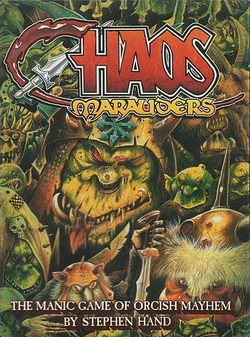 Chaos Marauders is a Card Game relaunched by Fantasy Flight Games, based on the original game by Games Workshop in 1987. The action takes place in the Grimdark world of Warhammer, where the players control tribes of greenskins trying to form the biggest warband in order to make war. To manage that, they must form three complete battle lines with the most powerful monsters, troops and relics available, in order to be the first in the line of battle in the next glorious invasion.