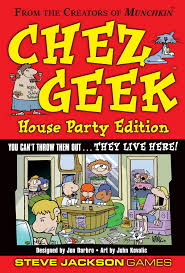 You can't throw them out... they live here!

Chez Geek is a card game from Steve Jackson Games, designed by Jon Darbro and illustrated by John Kovalic, that pokes fun at the geek lifestyle. Players take the role of a group of college-age slackers. Each player is dealt a random Job, which gives them Free Time (how many actions they can perform per turn), Income (how much money they can spend on Things or Activities), and a Slack Goal representing the amount of cool stuff they need to do (and buy) to overcome the stress of that job (from Slacker all the way up to Corporate Drone). Players can catch up on their sleep, play role-playing games (or computer games), watch bad TV, get some nookie, buy food, booze, cigarettes, and other recreational drugs, invite people over (or send annoying people to the other players' rooms), and other crazy stuff. There are, one might guess, elements of Take That, Audience! and This Loser Is You involved.

Two numbered expansions (Slack Attack and Block Party) were released for the game and were later combined into Chez Geek: House Party Edition. Two more expansions were released later, Slack to the Future (adding modern day items and activities) and Spring Break (adding vacation-themed cards). A number of spin-offs and variants have also been released, including Chez Goth and Chez Cthulhu. Not to be confused with Chez Dork, which is a card game themed on Kovalic's Dork Tower published by the same company and with a similar logo and geekish themes, but different rules.