Film / The Day of the Beast 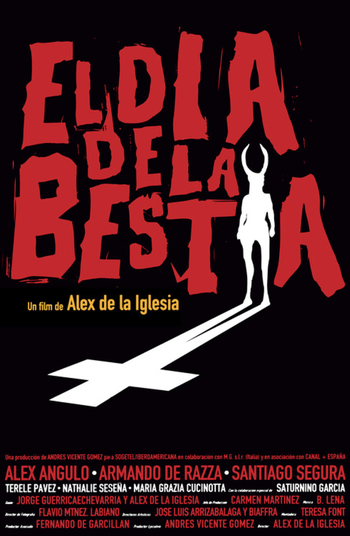 The Day of the Beast (or El Dia de la Bestia in the original Spanish) is a 1995 Spanish Action Horror-Comedy film directed by Alex de la Iglesia.
Advertisement:

Father Angel Berriartua has discovered that Horror Doesn't Settle for Simple Tuesday. Indeed, according to a secret code he believes to have found in the Bible, The Antichrist will be born somewhere in Madrid on Christmas and will turn it into the "Day of the Beast", bringing the apocalypse upon the world. Angel teams up with the heavy metal fanatic Jose Maria and Professor Cavan, host of a TV show about the occult, in order to find the Antichrist and stop him before it's too late.

The Day of the Beast contains examples of: