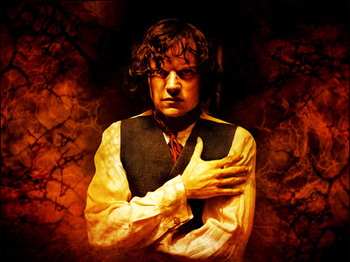 Dracula's coming.
Dracula is a television adaptation of Dracula by Bram Stoker for the United Kingdom's The BBC in 2006. There are significant differences from BBC's previous 1977 adaptation (which followed most of the main storyline).
Advertisement:

Taking place in London, England, Arthur Holmwood, faced with syphilis which he inherited from his father while approaching marriage with Lucy, meets with a mysterious group called the Brotherhood in the hopes of finding a way to fix his problems - for a price.

When Jonathan, the fiance of Lucy's friend Mina, is sent to Transylvania to sell properties to Count Dracula, a series of unsettling events occur leading to Dracula arriving on English shores. Caught in the middle of the conspiracy are Dr. John Seward and Mina Murray, who are forced to face the true nature of the tragedies and confront the vampire with the aid of Dr. Van Helsing.

The 2006 Dracula presents the following examples: