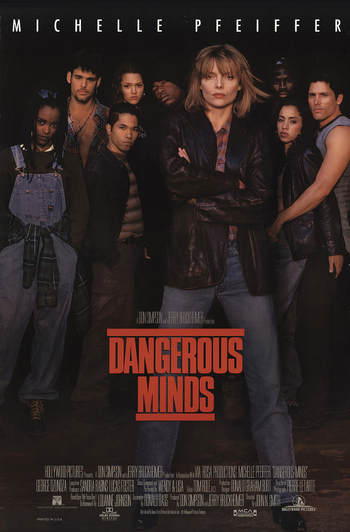 They say I got to learn but nobody’s here to teach me
If they can’t understand it how can they reach me?
I guess they can’t, I guess they won’t
I guess they front
That’s why I know my life is out of luck, fool
— Coolio, “Gangsta’s Paradise”
Advertisement:

Dangerous Minds is a 1995 drama film, directed by John N. Smith. It is based on My Posse Don't Do Homework (1992), an autobiography of Lou Anne Johnson. Like the book, it narrates the experiences of a former marine turned teacher while teaching at Carlmont High School, a California-based high school, where African-American and Hispanic students are the majority.

The film begins with Johnson (played by Michelle Pfeiffer), a retired marine, applying for a teaching position at Parkmont High School. To her surprise, she is almost immediately hired. It turns out Johnson applied for a position nobody else wanted, teaching literature to a rather tough audience. Her new class includes "tough, sullen teenagers, all from lower-class and underprivileged backgrounds". Several of them involved in criminal activities and all of them indifferent to whatever school has to teach them.

The film focuses on her efforts to gain their respect, teach them to appreciate literature, and change the teaching methods to better apply to their needs. Some of her methods, such as bribing them with rewards, anger the senior staff such as George Grandey (Courtney B. Vance) and Carla Nichols (Robin Bartlett). She also takes personal interest in the lives of individual students, trying to help them out in situations rather removed from school. The first is Callie Roberts (Bruklin Harris), a promising student experiencing Teen Pregnancy. The teacher convinces her to keep pursuing further education even as a single mother. Her second case Raúl Sanchero (Renoly Santiago), a reluctant gang member who has to be taught the basics of self-respect and getting used to operating outside a pack.

The third case proves a failure. Emilio Ramírez (Wade Domínguez) is a student involved in personal conflict with a hardened criminal acquaintance. Emilio considers it a matter of personal honor to face his problems alone, never asking for help. Johnson tries to protect him but finds no support from the school system. Without sufficient protection, Emilio is easily killed. Johnson regards it as a personal failure, announcing her intention to retire at the end of the school year. Her students take offense and protest their mentor abandoning them. The film ends with Johnson reconsidering her decision.

Along with Bad Boys (1995) and Crimson Tide, it was one of three hits in a single year by producers Don Simpson and Jerry Bruckheimer. Simpson died early in 1996 due to combined drug intoxication. His swan song was The Rock. The film had a television series spin-off, Dangerous Minds (1996 - 1997). It lasted one season, 17 episodes. Annie Potts was cast as Johnson.