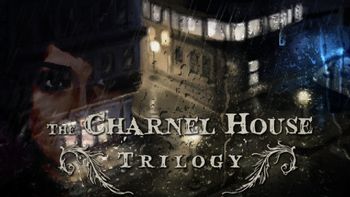 The train thunders on to the future.
The crows swoop and cry in the past.
The sepulchre will open.
As lost souls keep hoping.
That the next trip is also their last.

The Earth crawls its way to the surface.
The Augers look down as they sing.
As the final light dies.
And the island will rise.
In the court of the Charnel House King
—Louis Kassel
Advertisement:

The Charnel House Trilogy is an indie horror Adventure Game from 2015 by developer Owl Cave. Two strangers, Alex Davenport, a young woman with a troubled past, and the world-weary, middle-aged Dr. Harold Lang meet on a train at night, a journey which ends up turning into a nightmare, and they are soon forced to face their inner demons and worst fears. Available on Steam here

The game works as an extended intro to Owl Cave's next project Augur Peak which was originally slated for release in 2016. In October 2016, though, the developer would announce that the originally planned release wouldn't happen due to "publisher issues", but also that the game was still in the works.