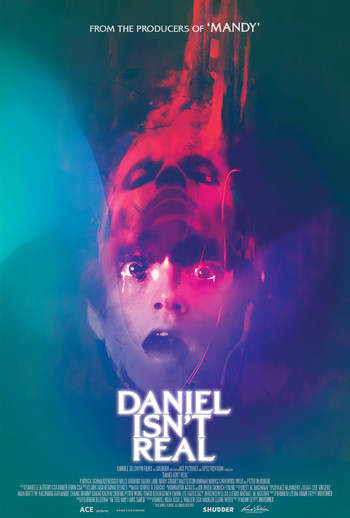 Don't listen to him.
Daniel Isn't Real is a 2019 American Psychological Horror Film, adapted from the novel In This Way I Was Saved, by Brian Deleeuw. The film is directed by Adam Egypt Mortimer, and written by Mortimer and Deleeuw.
Advertisement:

The story focuses on troubled college freshman named Luke (Miles Robbins) who, feeling stressed out by school and the need to care for his erratic mother, Claire (Mary Stuart Masterson) manifests the imaginary friend he hasn’t seen since he was a little boy. Daniel (Patrick Schwarzenegger) is everything Luke is not: sexy, bold, and very dangerous, which is why Luke ended up locking Daniel away in his mind all those years ago. But now his alter ego is back, and what begins as a helpful companionship turns into a parasitic exchange.

It had its world premier at the South By Southwest Film Festival in March of 2019, before being picked up for distribution by Metro Goldwyn Films, which released it theatrically in the US on December 6, 2019.