Film / Dance of the Dead 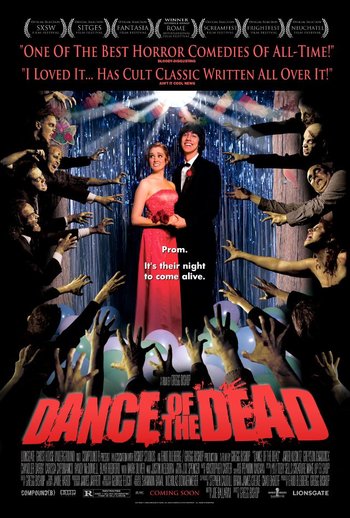 Dance of the Dead is an American zombie horror-comedy film released in 2008. It premiered exclusively at Mann's Chinese 6 Theaters in Los Angeles on October 13, before being released on DVD the next day. The film was directed by Gregg Bishop and written by Joe Ballarini. The film stars Jared Kusnitz, Greyson Chadwick, Chandler Darby, Carissa Capobianco and Mark Oliver.

In true style of the teen horror genre, a group of high school students try and defend their prom from hordes of the undead, who have been resurrected presumably via the chemicals emitted from the power plant, located conveniently next to the cemetery.

Dance of the Dead contains examples of the following tropes:

Teri: It was just you.