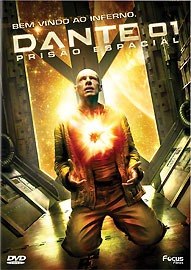 The light...
"It is said that on the gates of hell is written:
Abandon hope, all ye who enter here.
Yet it is here, in the midst of these pariahs, these reprobates,
that the true sense of my quest became clear.
I, Persephone,
having dedicated my life to curing minds,
saw, in the body of a patient,
the birth of a possible salvation.
The force that emanates from Saint George is beyond us.
I do not understand it yet,
but I know that no one on this station shall be spared."
— Persephone
Advertisement:

Dante 01 is a 2008 French science fiction directed by Marc Caro, one of the great minds behind The City of Lost Children and starring Lambert Wilson and Dominique Pinon.

This film follows the story of a mysterious man sent to a galactic space prison in the future. As he is placed with the threatening prisoners, his great powers begin to emerge, spawning unrest between the inmates and the doctors studying them.Saint George, as the man is called, must survive the hostilities of his fellow prisoners and the new doctor who wants to use them all as lab rats, all while struggling with the power that compels him to save everyone from the impending disaster that threatens all their lives.