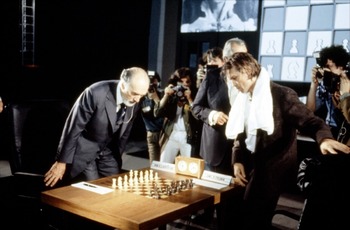 No, it's not one of those T&A movies that Cinemax used to run back in the 1990s. It's actually a film about chess! Akiva Liebskind (Michel Piccoli) and Pavius Fromm (Alexandre Arbatt) are facing off in Switzerland for the world chess championship. Both have their issues. Liebskind, the defending world champion, is from the Soviet Union. He's an older man, and he has has a serious heart condition. Liebskind was forced to come to Switzerland without his personal physician, as the doctor is seen as a defection risk, because he's a Jew whose son has already gone to Israel. Fromm, the much younger challenger, is also from Russia but defected to the west in the recent past. While otherwise happy with his decision, Fromm worries about his wife Marina, who is still stuck in the Soviet Union.

The movie features two major stars playing the wives of the two grandmasters. Leslie Caron (Gigi) plays Liebskind's wife Henia, but has hardly any dialogue. Liv Ullmann plays Marina, popping up in the final third of the film.

The French title translates out as "The Fool's Diagonal" and is a reference to the chess piece called "bishop" in English but "fool" in French, which travels on the diagonal squares.