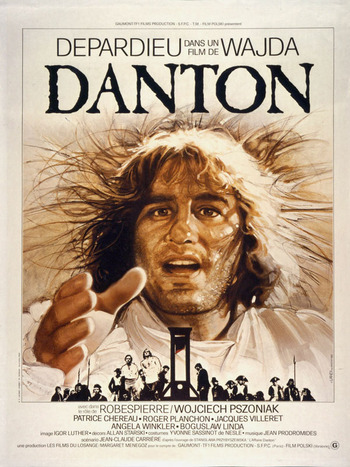 Danton (French pronunciation: ​[dɑ̃tɔ̃]) is a 1983 French language film depicting the last weeks of Georges Jacques Danton, one of the major figures of The French Revolution, played by Gérard Depardieu. It is an adaptation of the 1929 Polish play The Danton Case by Stanisława Przybyszewska.

The film stars Gérard Depardieu in the title role, with Wojciech Pszoniak as Maximilien Robespierre, and Patrice Chéreau as Camille Desmoulins. It was directed by the Polish director Andrzej Wajda and was an international co-production between companies in France, Poland and West Germany. All supporters of Danton (with the exception of Bourdon, who would later betray him) are played by French actors, while Robespierre's allies are played by Poles.

Not always rigidly historical, the film was accused of drawing parallels between the Reign of Terror during the French Revolution and the situation in then-contemporary communist Poland, in which the Solidarność movement was struggling against the oppression of the Soviet-backed Polish government. While such interpretation was denied by the filmmakers, the communist government banned the film and went as far as denying it being a Polish co-production.