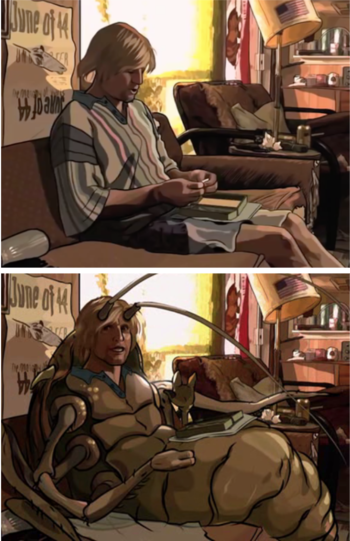 I am not the type to faint
When things are odd or things are quaint
But seeing things you know that ain't
Can certainly give you an awful fright!
— "Pink Elephants on Parade

Bob has been undergoing Sanity Slippage and begins hallucinating. Depending on the show, these may result in a Tomato Surprise at the end, revealing that someone he's been talking to was Dead All Along, or that the person he killed was an innocent bystander or an ally.

In a game with a Sanity Meter, this is one of the signs (sometimes, the only one) that it's getting pretty low. The hallucinations may also somehow injure the character in-game, even though they're not actually there. They may also just result in a Camera Screw, Interface Screw, or Impairment Shot.

If Bob is undergoing a Mushroom Samba, the hallucinations will usually not be shown on-screen, making it look like he's afraid of trees and talking to rocks.

Depending on the nature of the show, the hallucinations could be a source of comedy, tragedy, or both.

If Bob is dying or near death, this may be the cause of his Dying Dream. If Bob has been brought Back from the Dead recently, it may be a symptom of Resurrection Sickness.

If the hallucination takes the form of a person talking with one of the characters, it has a very high chance of lampshading itself by saying "I'm just a hallucination," or something along those lines.

If you can't believe the thing you're looking at, ask your friend if he can see it too.

Entire Situation is a Hallucination

Single Character is a Hallucination