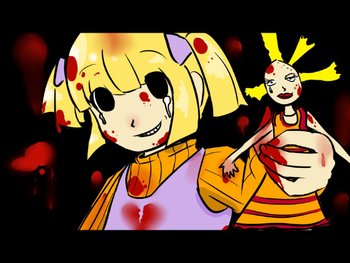 Now my world is perfect.
Advertisement:

The Rugrats Theory is a fan interpretation of Rugrats. Originally a Creepypasta-inspired narrative

, the theory proposes that the titular Rugrats are actually figments of Angelica Pickles' imagination. Through various means, each titular baby ends up becoming manifested in Angelica's delusions. Infamous for its content, the Rugrats Theory has been regarded as one of the darkest fan theories ever made, with several people claiming that it destroyed their perception of the series. It also inspired a Vocaloid song simply entitled the Rugrats Theory

In late 2016, the creator of the series, Arlene Klasky, has confirmed that the theory wasn't true during an interview with Buzzfeed

The Rugrats Theory provides examples of: