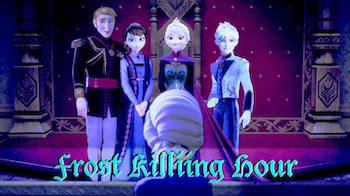 (set to Within Temptation's "Pale").

The story starts off as expected of Frozen: Elsa is a young princess with ice powers whose parents, the king and queen, are killed in a storm while at sea. The key difference is that Anna isn't Elsa's younger sister. Jack (of Rise of the Guardians fame) is Elsa's younger brother.

Both siblings are gifted with powers over ice, snow, and wind, but their powers are related to their emotional state. In their grief, they have difficulty controlling their powers. Elsa decides that she's in no state to serve as queen and tries to hand the title to Jack, however Jack doesn't want to become king. This upsets Elsa and causes her powers to go out of control. She proceeds to run to the mountains and away from her responsibilities, but Jack chases after his sister.

After Jack ends up accidentally falling through ice into a lake, he is rescued by a member of the royal guard named Hans. Jack learns of the guard's plans to capture the wayward princess by force. Before that can do that, Jack decides to bring Elsa back himself. In her panicked state, Elsa accidentally hits Jack in the heart with her ice powers. Part 1 ends with Jack frozen by the blast.

The second part begins when an adventurer named Flynn Rider climbs up the mountain and finds Elsa's castle. He convinces Elsa to return to her kingdom. Elsa is crowned queen soon afterwards but she's still haunted by what happened to her brother.