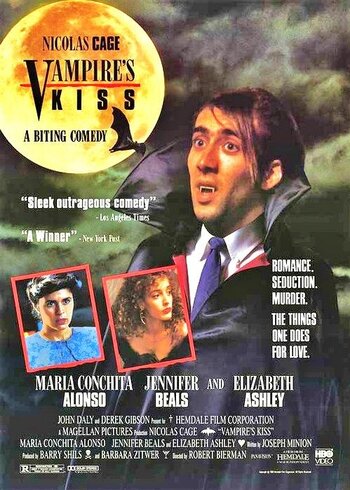 Vampire's Kiss is a 1989 horror comedy film directed by Robert Bierman and starring Nicolas Cage in what could quite possibly be his craziest performance in a career full of crazy performances, along with Maria Conchita Alonso, Jennifer Beals, and Elizabeth Ashley.

Peter Loew (Cage) is a self-centered yuppie in New York City who's slowly losing his mind. He works as a literary agent by day, and hops nightclubs picking up women by night. In the opening, Peter is talking with his therapist, Dr. Glaser (Ashley), whom he visits frequently, about his sexual conquests. One night, he takes a woman home with him, and a bat flies into his apartment. The experience leaves him feeling both frightened and sexually aroused, something which he reports to Dr. Glaser.

Soon after, he meets up with a woman named Rachel (Beals) in a club and takes her to his apartment to have sex. However, unknown to Peter, Rachel is a vampire, and she bites Peter on his neck while they are having sex. After that, he believes that he is turning into a vampire, and consequentially, he develops a sensitivity to sunlight and can no longer see his reflection. However, although Peter believes his reflection is gone, it's visible to the audience, and although he thinks he'll burn in the sun, it has no effect on him.

Not to be confused with the SNES game known in Europe as Castlevania: Vampire's Kiss. For that, see Castlevania: Dracula X.

Nicholas Cage at his Cage-yist without so much as raising his voice.

Nicholas Cage at his Cage-yist without so much as raising his voice.