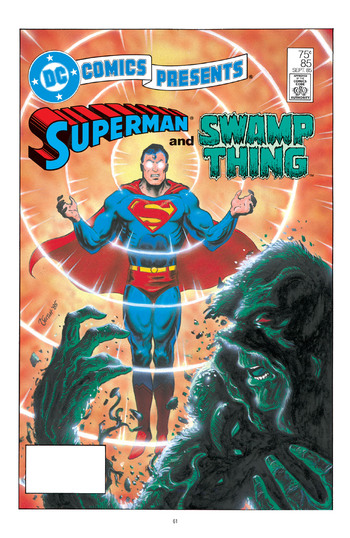 Beside him lies the fragment of a shattered world. Before him lies the sunstruck highway. The Man of Tomorrow is heading South to die.
— Narration
Advertisement:

The Jungle Line is a Superman story written and illustrated by Alan Moore and Rick Veitch and published in DC Comics Presents #85 (1985). It was the second Superman story produced by Moore, between For the Man Who Has Everything and Whatever Happened to the Man of Tomorrow?.

Clark Kent attends a press conference where it is announced the discovery of a species of alien fungus which had become adhered to a meteorite and somehow survived the rigors of space. As listening to the lecturer, Clark suddenly feels dizzy and suffers a brief hallucination. A quick search for information confirms his suspicions: that alien organism is a Bloodmorel, a species of parasitic Kryptonian fungus whose spores permeate the skin and settle in the bloodstream, causing fever, hallucinations, bouts of incapacitation, chronic fatigue, and eventually almost certain death.

Soon Superman starts experiencing the first symptoms: his powers turn on and off at inopportune times, he feels overwhelmingly exhausted, he suffers hallucinations and has nightmares. Examining the Bloodmorel's sample provides no clues for a cure, and Superman assumes he is going to die.

Nevertheless, he wants to die alone to spare his beloved ones from the pain, so he buys a second-hand car and heads towards the South, believing he will not be in danger of being found by any super-hero.

He is wrong, though, because the South's swamplands are frequented by a very unusual protector.

Tropes found in this story: