Film / Harry Potter and the Order of the Phoenix 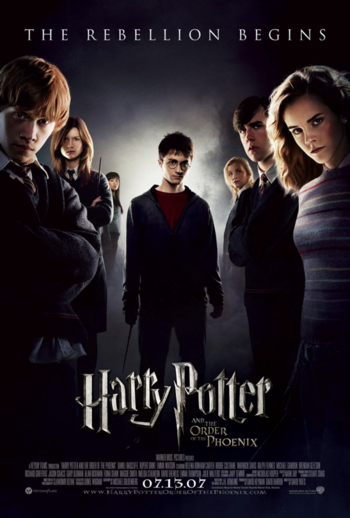 "If Voldemort's raising an army, then I want to fight."
"I want you to listen to me very carefully, Harry. You're not a bad person. You're a very good person, who bad things have happened to. You understand? Besides, the world isn't split into good people and Death Eaters. We have all got both light and dark inside us. What matters is the power we choose to act on. That's who we really are."
— Sirius Black
Advertisement:

Harry Potter and the Order of the Phoenix is the fifth film in the Harry Potter series, released in 2007. It marks the in-series debut of director David Yates, who would go on to direct the rest of the series and the Fantastic Beasts spinoffs.

Voldemort's back, but the Ministry of Magic is in denial, so they decide the best solution is to start a Government Conspiracy to cover up all the evidence, and send one of their own — Dolores Umbridge — to Hogwarts to take over. Meanwhile, Harry has been haunted by strange dreams...

Followed by Harry Potter and the Half-Blood Prince.

Harry Potter and the Order of the Phoenix contains examples of:

"I must not tell lies"
Feedback