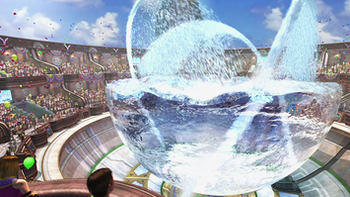 Think that's breaking the laws of physics? You should see the sport they play in there.
"Aren't you surprised by how we got water to blatantly ignore gravity?" [Beat] "What?!?! You think it is easy altering the laws of physics, like gravity?!?!? How 'bout you try?!?"
— A Random Toad lampshading this trope in Super Mario 63
Advertisement:

Water works in a pretty simple way. Water flows wherever gravity takes it, and water takes the shape of its container. Or does it? Floating Water is the strange fictional occurrence in which water decides to defy gravity, and sometimes make a plethora of shapes.

There can be any number of explanations that can be made by the people using this trope, but it really all boils down to the Rule of Cool. Remember however, it can still be in a glass container of some sort, just expect it to be crystal clear and barely noticeable. Pretty much guaranteed when someone is Making a Splash. Is an excellent source of Parting the Sea.

The water in this area is eager to show you the law of gravity doesn't apply to it.

The water in this area is eager to show you the law of gravity doesn't apply to it.