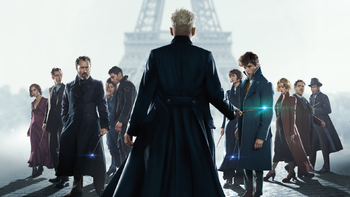 Fantastic Beasts is a fantasy film series set in the Harry Potter Expanded Universe (which was rebranded Wizarding World in 2016). The films are essentially prequels to the Harry Potter books and films and the first two are exclusively written for the silver screen by J. K. Rowling with Steve Kloves co-writing the upcoming third instalment. David Yates, director of the second half of the Harry Potter film saga, has helmed every film so far. Most of the namesake fantastic beasts are based on the book Fantastic Beasts and Where to Find Them.

The films take place in the 1920s and follow the adventures of British magizoologist Newt Scamander (the In-Universe author of the aforementioned book) and his friends, the regular human Jacob Kowalski and two American witches, Porpentina and Queenie Goldstein. Together with their allies and the help of some magical creatures Newt tamed, they witness and face the rise of the dark wizard Gellert Grindelwald.

The series is currently intended to count five instalments, with two having been released and the third having finished principal photography. It has its own character sheet.