"There's another law stronger than the common law... The law of the land."
— Bull McCabe 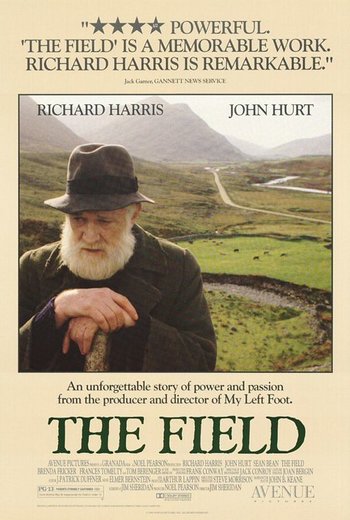 The Field is a 1990 drama film written and directed by Jim Sheridan, based on the play of the same name by John B. Keane. Set in early 1930s Ireland, the story follows aging farmer "Bull" McCabe (played by Richard Harris) who has spent most of his life cultivating a small field. When he learns the landowner decides to auction it, it becomes war between him and the townsfolk who want to buy it. The cast also includes Sean Bean, John Hurt, and Tom Berenger.

The film was a major comeback role for Harris, who'd spent most of the previous decade mired in substance abuse issues and starring in schlock like Tarzan the Ape Man and Strike Commando II. He was nominated for an Oscar, BAFTA, and Golden Globe for his performance.