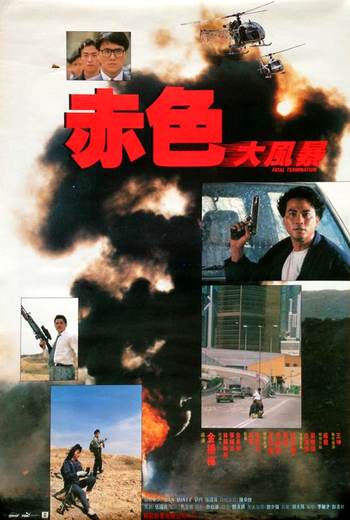 When you blow all your budget for the stunts, action, explosions, insurance and therapy bills for child actors... and realize you have 12 bucks left to make the poster.

When an arsenal of stolen weapons smuggled into Hong Kong gets confiscated by Police Officer John (Ray), leading to the death of the lead smuggler, the smuggler's brother swears revenge, which will inevitably get John's entire family - including his wife Moon (Moon) and young daughter dragged into danger. And everything else is made further complicated by Jimmy (Simon) and Billy, two other cops involved in the arrest, and a corrupt customs official.

This movie is notorious among Moon Lee's fans for what is possibly the most f***d-up stunt ever performed by a child actor, happening in the scene where the child portraying Moon and Ray's onscreen daughter gets abducted by being grabbed from the hair, and hoisted outside a moving vehicle while hanging a few feet off the ground through the hair in an intense 2-minute chase scene. It can be seen here

(WARNING: Some may find the linked video disturbing). note In a behind-the-scenes video, the stunt was pulled off by having the child actor being suspended from wires (instead of her hair, thank god) attached to a prop arm. The chase scene is deliberately undercranked to give an impression that its a lot faster on camera than it was in real life, and precautions are taken to ensure maximum safety for the little girl playing the kidnapped daughter. But still, damn!