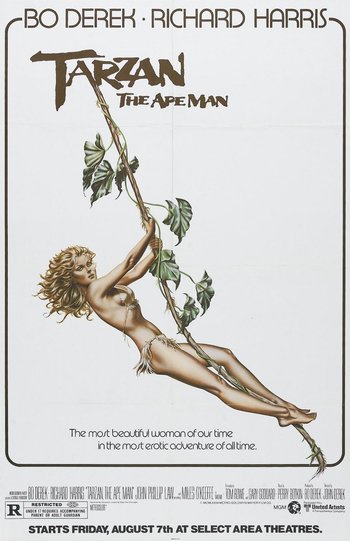 Yes, that's Jane on the poster, despite the film being titled after Tarzan
"Tarzan, the Ape Man is The Blue Lagoon with elephants."
—Roger Ebert
Advertisement:

Tarzan, the Ape Man is a 1981 film starring Bo Derek as Jane, Richard Harris as Dr. James Parker, John Phillip Law as Harry Holt, and Miles O'Keeffe as Tarzan. The movie was intended to retell the Tarzan story from Jane's perspective, a fact which was made clear by the original Working Title of Me, Jane. As it is, audiences are left to wonder why Tarzan seems to be a Satellite Love Interest in his own film.

The storyline, such as it is, is mostly a rehash of the 1932 film by the same name. This version is meant to be a more adult look at the Tarzan mythos, focusing on Jane's sexual awakening, and featuring a large supply of Fanservice along the way. This is Tarzan updated for the sexual revolution, or at least that's what they seem to be going for here. To date, this is the only Tarzan movie to receive an "R" rating.

While the film made back nearly six times its budget at the box office, reception from general audiences was largely negative. Male audience members hoping to see a naked Bo Derek were disappointed to see what was mostly a romance film with Tarzan in a supporting role, while female audience members were turned off by the more blatant scenes of nudity. It was also ravaged by the critics, and nominated for several Razzies, winning "Worst Actress" for Bo Derek. Since then, it's come to be regarded as a camp classic of the So Bad, It's Good variety.