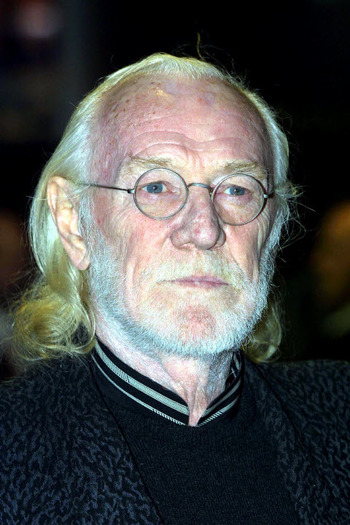 "Actors take themselves so seriously...Acting is actually very simple, but actors try to elevate it to an art."
Advertisement:

Richard St. John Harris (1 October 1930 — 25 October 2002) was an Irish actor and singer, best known for his roles in the kitchen sink drama This Sporting Life, the westerns Major Dundee opposite Charlton Heston, A Man Called Horse and Unforgiven opposite Clint Eastwood, the 1967 musical adaptation of Camelot (where he played King Arthur opposite Vanessa Redgrave as Queen Guenevere and her long time love Franco Nero as Lancelot), Oliver Cromwell in Cromwell, The Molly Maguires opposite Sean Connery, Gladiator opposite Russell Crowe, and as the original Albus Dumbledore in the first two Harry Potter film adaptations — a role he originally turned down but then took when his then 11-year-old granddaughter threatened never to speak to him again if he didn't. Originally a rugby player with great promise, he was forced to change careers due to a bout with tuberculosis as a teenager. Off screen he was known for being an ornery rebel who loved a good drink as much as he did literature — his drinking buddies were none other than Peter O'Toole and Richard Burton. He mellowed in his later years and tended to play a lot of wise and occasionally eccentric old man roles, and was said to have enjoyed telling stories to the cast and crew of his later films — often picking up right where he left off between takes.

Also one of the more unlikely examples of a One-Hit Wonder. His rendition of the seven-minute-long Jimmy Webb song "MacArthur Park" became a big surprise hit in 1968. He actually recorded several albums and scored a few more minor hits, but never quite repeated his initial musical success.

Harris died of Hodgkins disease in 2002, aged 72. Married twice, Harris had three sons with his first wife, all of whom followed in his footsteps and became actors themselves — Damian, Jared, and Jamie.

Films featuring Richard Harris which have their own pages on this wiki include: