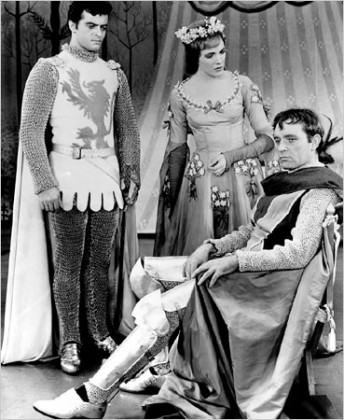 The original Broadway cast: Robert Goulet as Lancelot, Julie Andrews as Guinevere and Richard Burton as Arthur
"Don’t let it be forgot, that once there was a spot, for one brief shining moment that was known as Camelot."
Advertisement:

A 1960 musical by Lerner and Loewe, shortly after the success of My Fair Lady. It is an adaptation of T.H. White's The Once and Future King, following the legends of King Arthur.

At the start of the story, King Arthur is a young man, anxiously awaiting the arrival of his bride, Guinevere (or "Jenny"), who shares a similar amount of anxiety. Hilarity Ensues for a short while before they are married, but Merlin is abducted by Nimue before he can warn Arthur of the perils of the future. King Arthur decides to write a new code of chivalry, "where violence is not strength, and mercy is not weakness," and forms the round table.

Then comes along Sir Lancelot, an enormous braggart. Nobody really likes him that much, until he wins the tournament and seems to bring a slain knight back from the dead. Jenny and Lance fall in love, which Arthur becomes painfully aware of.

Then Mordred, Arthur's illegitimate son comes, with the intention of ruining his father. He turns the knights back to their barbaric ways, and exposes the affair between Jenny and Lance, leaving Arthur no choice but to have her executed. Lancelot comes rushing in to rescue her, but it incites a war.

The musical is most heavily associated with the Kennedy Administration, as JFK was a fan of the show.

Later adapted in 1967 by Warner Bros. into a movie starring Richard Harris as Arthur, Vanessa Redgrave as Guinevere and Franco Nero as Lancelot.

In March 2022, it was announced that Aaron Sorkin would be revising the book for a new Broadway revival of the musical, set to open in December 2022.

For the 2011 television series produced by Starz and GK-TV, see here.