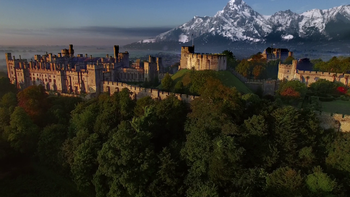 It's only a model.
Advertisement:

Camelot is the legendary headquarters of King Arthur with the name variously being used to refer to either a city or town or more specifically Arthur's castle — in any case, where the royal court was based. The real location of Camelot is widely debated with the most common theories being Wales or The West Country (including Cornwall). It is first mentioned in a Chivalric Romance by Chrétien de Troyes when Arthur is said to relocate from Caerleon to Camelot, but does not bear great significance; Camelot became cemented as the hub of the kingdom a few centuries later in British texts and about a century after that in French texts and completely, thanks to Le Morte D Arthur. Camelot is said to sit on the same river as Astolat, be surrounded by moors, forests, mountains, and contain St. Stephen's Cathedral. After Arthur's death, the castle at Camelot is said to be destroyed by Mark of Cornwall.

Camelot may also refer to:

See also other media and tropes about the Arthurian Legend.