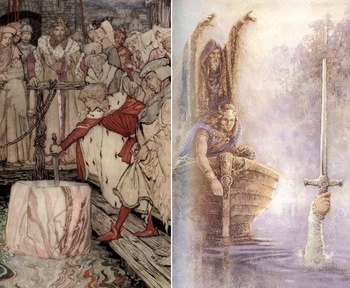 "Perceval, take the sword. Find a pool of calm water....cast the sword into it. Do as I command. One day, a new King will come, and the Sword will rise again."
— King Arthur, John Boorman's Excalibur
Advertisement:

Excalibur: the legendary sword of King Arthur and the go-to name when you need a Cool Sword. Given its status as a Public Domain Artifact, there are quite a few references to it in various media, not to mention the actual Arthurian literature.

The name Excalibur is derived from from the original Welsh Caledfwlch or Caledvwlch,note pronounced "ka-led-vulkh", meaning "hard cleft" or "battle breach" depending on the translator. cognate with the Caladbolg of Irish myth. This was rendered as Caliburnus in Latin. Over the centuries the spelling further developed into Escalibor and other variations, finally ending up as Excalibur. Some versions say that Arthur pulled Excalibur from a stone (and anvil on top of the stone) to prove his right to be king. Other versions say that the sword from the stone was not Excalibur, but a different sword, and Arthur instead was given Excalibur by The Lady of the Lake.

Modern authors have to usually pick one of these old versions and stick with it. (Although Excalibur found a way to combine the stories). Sometimes modern authors try to distinguish the swords by giving each one a different version of the name "Excalibur", like calling one of them "Caliburn" or "Collbrande" instead.

To avoid confusion when adding examples, please refer to the following pages:

Other tropes frequently associated with Excalibur:

Examples of the sword itself in media: