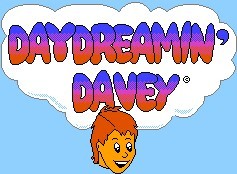 Day Dreamin' Davey is a video game developed by Sculptured Software and published by HAL Laboratory for the Nintendo Entertainment System in June 1992. The game stars the titular Davey on a boring day in school, but he keeps falling into daydreams, for example, when a school bully steals his pencil and he goes into the Middle Ages.

The game plays like an adventure game in which our hero walks around three different dream worlds and collects items to progress.