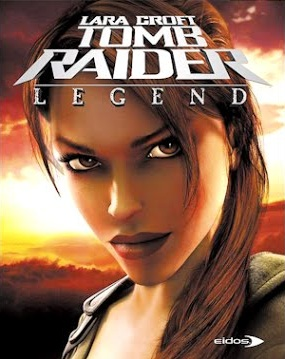 "You'd be amazed how persuasive I can be."
Lara: Isn't she beautiful? I'm falling in love all over again.
Zip: You say that to all the ruins.
Advertisement:

Lara Croft Tomb Raider: Legend was released in 2006 and is the seventh entry in the Tomb Raider series. It marks the first reboot of the series.

Due to its predecessor's lack of commercial success, Eidos Interactive decided to hand over the franchise to Crystal Dynamics, making it the first game to not be developed by Core Design, who had been in charge of the series since its genesis.

The game centers around Lara Croft's pursuit of the fragments of an ancient sword, which she believes to be connected to a strange device that caused the disappearance of her mother. Her quest for the artifacts is soon complicated by the appearance of an old acquaintance, however, and Lara must race to reach the next piece before her adversaries do. As she journeys across the globe, bits and pieces of various myths seem to meld together, with this mysterious sword at the center.

The locations she visits during the game include Bolivia, Peru, a Yakuza-infested skyscraper in Tokyo, Ghana, an old research facility in Kazakhstan, a derelict, tacky King Arthur museum in Cornwall and Nepal.

As far as critical reception goes, the game was received very well, being the fastest selling (note, not highest selling) game in the series so far. It garnered a large amount of positive reviews and remains one of the highest-rated games in the history of the franchise. Critics especially praised the graphics, the soundtracks and the fluidity with which players could control Lara - a far cry from the clunky controls of the classic Lara. The game was criticised, however, for its shortness, the - at times - wonky camera and the linear level design, sacrificing much of the freedom of the previous Tomb Raider games. General consensus seemed to be that, while Legend is not particularly innovative, being a relatively standard Third Person Action-Adventure game, it also doesn't really do anything wrong. And given where the franchise was coming from, the game did a pretty good job at getting the Tomb Raider series back on track.

Also marking a change from previous Tomb Raider games (which were exclusive to PlayStation and PC, with some ports to Sega), Tomb Raider Legend went fully multiplatform: it was released for PC, PlayStation 2 and 3, PlayStation Portable, Xbox and Xbox 360, Nintendo GameCube, Game Boy Advance, Nintendo DS and mobiles.

Tomb Raider: Anniversary, released in 2007, is a Video Game Remake that sets the original Tomb Raider within the continuity established by Legend (which actually makes it a Prequel in addition to a remake). Tomb Raider: Underworld, released in 2008, continues the story introduced in Legend.