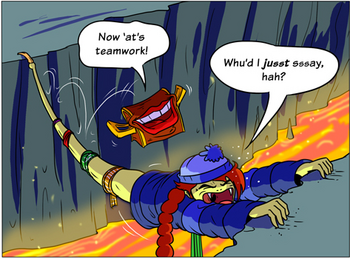 Faced with an impassable obstacle, such as a body of water, characters create improvised platforms in order to transverse safely.
Advertisement:

The ability to create platforms to cross wide gaps is a common Power-Up in platformers/action-adventure games. A Barrier Warrior can use his/her powers to make these.