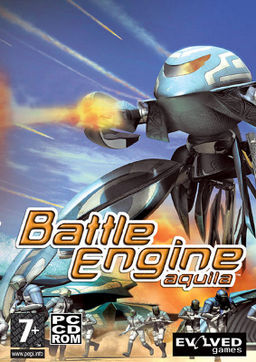 Try not to step on your own troops.
Advertisement:

Battle Engine Aquila is a game based where two armies fight over what land is left after the end of the world has caused the sea levels to rise and destroy almost all livable land. It was launched in January 2003 for PS2 and Xbox, with the PC version following in October 2003. The PC version was rereleased on Steam and GOG.com in September 2020.

You play Hawk Winter, a hotshot Dockworker & hovercraft racer who has a friend involved in the Aquila project and recruits him as its pilot. You can pilot 5 different Battle Engine variants, vehicles that can transform between walker mode and jet mode.