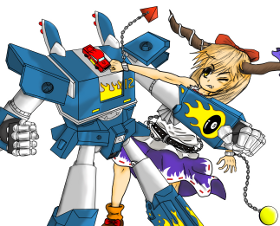 Yeah, that's pretty much what the whole plot boils down to.
"You want to surpass an oni? You're interested in a fight? Fine with me. Let's you and me fight."
— Suika Ibuki
Advertisement:

is a Megas XLR / Touhou Project crossover Fanfic written during May 2012 by Curtis Wildcat. It consists of 8 chapters: the main story, an alternate ending, and an Extra Stage. It can also be found at Archive of our Own here.

While Coop is putting the moon back together during the aftermath of the Glorft's failed attempt to crash it into the Earth, Megas is attacked by a Lunarian mech. During the fight that follows, an attempt is made by the Watatsuki sisters to warp them directly into the Lunar Capital, all the better to sate the Earthlings' curiosity about the previously-unknown inhabitants. Instead, Megas, with Coop and his friends inside, are sent to Gensokyo when the teleportation technology malfunctions.

For a land that just got finished facing off against the worst weather in its history, the perpetrator of that disaster surely can't be what they need...

The Extra Stage has Coop and the others back in Gensokyo on an alleged gift-giving tour, with his presence causing the plans of some of Gensokyo's finest to go off the deep end.

Tropes seen in both parts of Fantasy of Utter Ridiculousness include:

The main story and Alternate Ending contains examples of the following tropes:

Tropes specific to the Extra Stage include:

Advertisement:
The titan's shadow blankets all. Fear the fat man in both its forms.